What Is A SEER Rating? 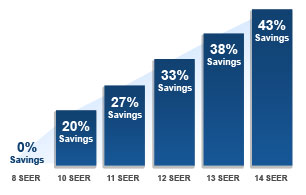 The efficiency of air conditioners is often rated by the Seasonal Energy Efficiency Ratio (SEER) which is defined by the Air Conditioning, Heating, and Refrigeration Institute. Every AC system comes with a SEER rating. The higher the number, the more efficient the unit.

Now, this doesn’t mean that a higher rated unit will be able to reach cooler temperatures than a unit with a lower SEER rating. They will each be able to cool the air to the same degree. What the higher rating does mean is that the unit will use less energy to do the same job.

In general, seeking out a model with a higher SEER is preferable because not only will it be highly efficient, but it will be cheaper to run. Although older AC systems have ratings of 6 or even lower, any units manufactured for the US after January 2006 were required to have a minimum SEER rating of 13. Depending on the brand, you can now even find units with ratings of 20 or higher. The energy requirement doesn’t apply to window units, so some of those systems still have SEER ratings of 10.

Central AC systems with ratings less than 9 are rare to see these days because many of these units are being replaced with newer, more efficient ones. If your air conditioner is more than 10 to 15 years old, it could be be time to update. Even if you hate the idea of losing an AC system you’re familiar with, upgrading to a new model truly is worth it. Consider this: the Department of Energy estimates that by upgrading from a 9 to a 13, you can save about $300 per year! Today’s highest quality air conditioners use 30 to 50% less energy to generate the same amount of cooling as air conditioners made in the 1970’s.

When you are consulting with an HVAC professional regarding a new air conditioning system for your home, ask what SEER rating he or she would recommend. The overall performance of an AC system will depend on the SEER, installation, and required maintenance. Contact Kiwi AC & Heating to learn more!

Want to know more? Give us a call and we'll be happy to answer any questions you may have. You can trust Kiwi AC & Heating with all your home service needs.